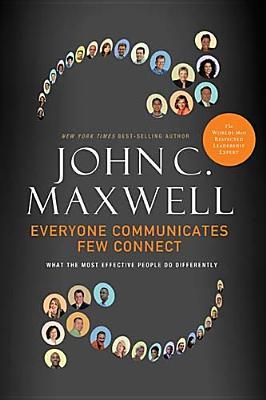 World-renowned leadership expert and bestselling author John C. Maxwell says if you want to be an effective leader, you must learn how to connect with people. While it may seem like some folks are just born with a commanding presence that draws people in, the fact is anyone can learn to communicate in ways that consistently build powerful connections. Everyone Communicates, Few Connect, helps you succeed by revealing Maxwell’s Five Principles and Five Practices to develop this crucial skill of connecting, including: finding common ground, keeping your communication simple, capturing people's interest, inspiring people, and staying authentic in all your relationships. Your ability to achieve results in any organization--be it a company, church, nonprofit, or even in your family--is directly tied to the leadership skills in your toolbox. Connecting is an easy-to-learn skill you can apply today in your personal, professional, and family relationships to start living your best life.