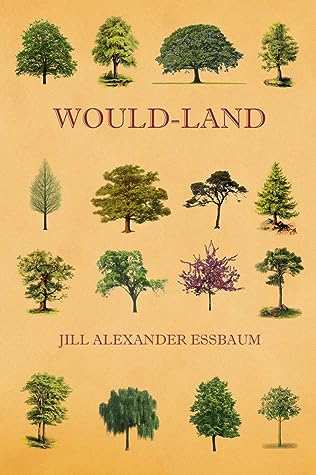 Jill Alexander Essbaum’s poems are made of felt terror, where the speaker asks, out of fear, “can a fire burn in the rain?” In a ruined landscape of unpredictable devastation, Essbaum haunts the erotic wreckage of a brutal world, transcending with a determination that is enduring, boundless, unforgettable.  —Diana Marie Delgado, Tracing the Horse  As the title of this gorgeous collection suggests, Would-Land is an adventure in wordplay and the discoveries of our heart- and hearth-truths that language (in its inevitable slippage) can reveal. And the slips of both language and self are what’s at stake here. Oscillating between elegiac and epigrammatic, Essbaum’s poems share at once the ecstasies of sound and syncopation of a modern-day Gerard Manley Hopkins, and the acerbic insights of a more sensuous Dorothy Parker, with a little of Emily Dickinson’s taut ferocity for the sublime thrown in. Love, loss, coupling, uncoupling, coupleting, incompleting, faith, forgiveness—all of this and more is explored in these poems which are both gut-wrenching in their candor and lavish in their language. I am an unrepentant fan.  —Rebecca Lindenberg, Love, An Index  Jill Alexander Essbaum is an ace at poetic closure, and these poems are all about endings—of a marriage and of a suite of former selves. In twisty triple rhythms and sound-driven prose poetry, she portrays how a couple “drilled and hit demons,” and what came after. Language itself becomes the consolation: slant-rhyming, suggestive, and mutable, it leads poet and readers into landscapes of possibility. These poems convey vulnerability with virtuosity.  —Lesley Wheeler, The State She's In