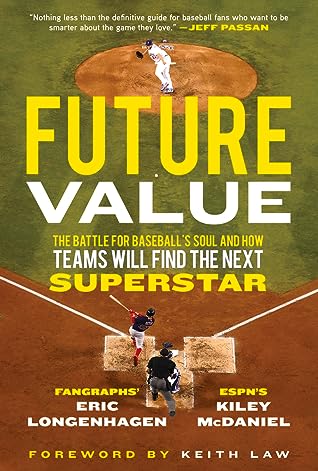 How to watch baseball and see the future For the modern major league team, player evaluation is a complex, multi-pronged, high-tech pursuit. But far from becoming obsolete in this environment⁠—as Michael Lewis' Moneyball once forecast⁠—the role of the scout in today's game has evolved and even expanded. Rather than being the antithesis of a data-driven approach, scouting now represents an essential analytical component in a team's arsenal.Future Value is a thorough dive into the world of the contemporary scout—a world with its own language, methods, metrics, and madness. From rural high schools to elite amateur showcases; from the back fields of spring training to major league draft rooms, FanGraphs' Eric Longenhagen and Kiley McDaniel break down the key systems and techniques used to assess talent. It's a process that has moved beyond the quintessential stopwatches and radar guns to include statistical models, countless measurable indicators, and a broader international reach. Practical and probing, discussing wide-ranging topics from tool grades to front office politics, this is an illuminating exploration of what it means to watch baseball like it's your job.