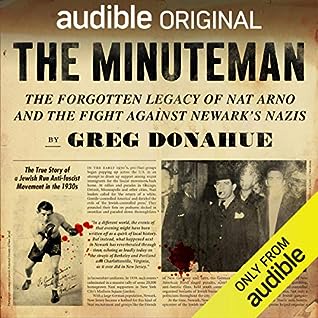 In the early 1930’s, pro-Nazi groups began popping up across the US in an attempt to drum up support among recent immigrants for the fascist movement developing back home. With a large German population, Newark, New Jersey became a hotbed for this kind of Nazi recruitment, with pro-fascist groups like the German-American Bund staging parades, screening anti-Semitic films, and organizing boycotts of Jewish business and politicians through the city. But at the time, Newark was also the epicenter of the Jewish mob and Abner ‘Longie’ Zwillman, known as the “Al Capone of New Jersey,” who had made a fortune in gambling, bootlegging and racketeering and controlled the city’s ports and police force, helped organize a group of ex-boxers, factory workers and students to defend the city’s Jewish interests. The group dubbed themselves ‘The Minutemen’ - ready at a moment’s notice - and took to breaking up Nazi gatherings using a combination of stink bombs, baseball bats, lead pipes and brass knuckles.Greg Donahue’s The Minuteman, tells the story of one of Newark’s native sons; ex-prizefighter and longtime Zwillman enforcer Sidney Abramowitz, a.k.a. Nat Arno, who took over leadership of the Minutemen in 1934 and made it his personal business to put an end to what he saw as the Bund’s “anti-American” activities. For six years, Arno and his crew of vigilantes battled Newark’s Nazis at every turn. The Minuteman is a story of the ethics of violence in the face of fascism; a forgotten legacy that is as relevant now as it was nearly a hundred years ago.Photos included in cover art courtesy of the Jewish Historical Society of NJ - Warren Grover Collection.