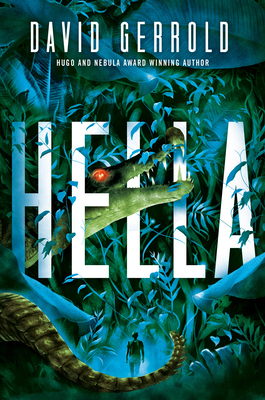 A master of science fiction introduces a world where everything is large and the problems of survival even larger in this exciting new novel.Hella is a planet where everything is oversized—especially the ambitions of the colonists.The trees are mile-high, the dinosaur herds are huge, and the weather is extreme—so extreme, the colonists have to migrate twice a year to escape the blistering heat of summer and the atmosphere-freezing cold of winter.Kyle is a neuro-atypical young man, emotionally challenged, but with an implant that gives him real-time access to the colony’s computer network, making him a very misunderstood savant. When an overburdened starship arrives, he becomes the link between the established colonists and the refugees from a ravaged Earth.The Hella colony is barely self-sufficient. Can it stand the strain of a thousand new arrivals, bringing with them the same kinds of problems they thought they were fleeing?Despite the dangers to himself and his family, Kyle is in the middle of everything—in possession of the most dangerous secret of all. Will he be caught in a growing political conspiracy? Will his reawakened emotions overwhelm his rationality? Or will he be able to use his unique ability to prevent disaster?