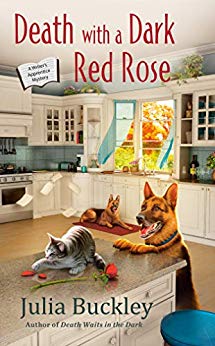 Writer's apprentice Lena London is enjoying life in Blue Lake and being newly engaged, but is soon drawn into the terrifying disappearance of one of her closest friends....Lena is starting to feel like having it all may actually be possible! She and suspense novelist Camilla Graham are busily plotting their next novel and she's got a brand-new diamond ring on her finger thanks to her fiancé, Sam West. The only blot on her Blue Lake life is a strange new corporation that has come to town called Plastisource. They seem to be intent on gobbling up prime real estate and changing the landscape of Lena's lovely adopted home.When she and Sam get a call from their good friend (and Blue Lake detective) Doug saying that his girlfriend--and Lena's pal Belinda--isn't answering her phone and missed a date with him, they all head out to her home. The trio is shocked to discover that Belinda's purse and phone are at her house, along with a single red rose on her countertop--but Belinda herself is missing. Has she been abucted? Could the strange new corporation play a role in her disappearance? Lena is determined to find out and rescue her friend because she knows that the truth can be stranger and much more deadly than fiction....