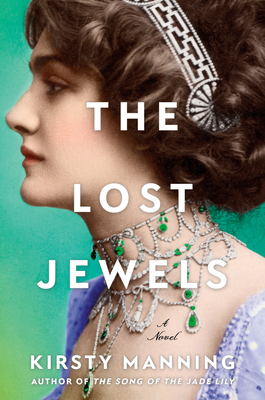 From the author of  The Song of the Jade Lily  comes a thrilling story of a family secret that leads to a legendary treasure.Why would someone bury a bucket of precious jewels and gemstones and never return?  Present Day. When respected American jewelry historian, Kate Kirby, receives a call about the Cheapside jewels, she knows she’s on the brink of the experience of a lifetime. But the trip to London forces Kate to explore secrets that have long been buried by her own family. Back in Boston, Kate has uncovered a series of sketches in her great-grandmother’s papers linking her suffragette great-grandmother Essie to the Cheapside collection. Could these sketches hold the key to Essie’s secret life in Edwardian London? In the summer of 1912, impoverished Irish immigrant Essie Murphy happens to be visiting her brother when a workman’s pickaxe strikes through the floor of an old tenement house in Cheapside, near St. Paul’s Cathedral in London. The workmen uncover a stash of treasure—from Ottoman pendants to Elizabethan and Jacobean gems—and then the finds disappear again! Could these jewels—one in particular—change the fortunes of Essie and her sisters? Together with photographer Marcus Holt, Kate Kirby chases the history of the Cheapside gems and jewels, especially the story of a small diamond champlevé enamel ring. Soon, everything Kate believes about her family, gemology, and herself will be threatened. Based on a fascinating true story, The Lost Jewels is a riveting historical fiction novel that will captivate readers from the beginning to the unforgettable, surprising end.