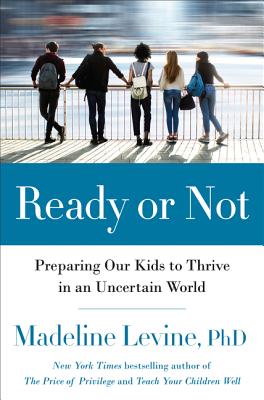 The New York Times bestselling author of The Price of Privilege and Teach Your Children Well explores how today’s parenting techniques and our myopic educational system are failing to prepare children for their certain-to-be-uncertain future—and how we can reverse course to ensure their lasting adaptability, resilience, health and happiness.In The Price of Privilege, respected clinician, Madeline Levine was the first to correctly identify the deficits created by parents giving kids of privilege too much of the wrong things and not enough of the right things. Continuing to address the mistaken notions about what children need to thrive in Teach Your Children Well, Levine tore down the myth that good grades, high test scores, and college acceptances should define the parenting endgame. In Ready or Not, she continues the discussion, showing how these same parenting practices, combined with a desperate need to shelter children from discomfort and anxiety, are setting future generations up to fail spectacularly.Increasingly, the world we know has become disturbing, unfamiliar, and even threatening. In the wake of uncertainty and rapid change, adults are doubling-down on the pressure-filled parenting style that pushes children to excel. Yet these daunting expectations, combined with the stress parents feel and unwittingly project onto their children, are leading to a generation of young people who are overwhelmed, exhausted, distressed—and unprepared for the future that awaits them. While these damaging effects are known, the world into which these children are coming of age is not. And continuing to focus primarily on grades and performance are leaving kids more ill-prepared than ever to navigate the challenges to come.But there is hope. Using the latest developments in neuroscience and epigenetics (the intersection of genetics and environment), as well as extensive research gleaned from captains of industry, entrepreneurs, military leaders, scientists, academics, and futurists, Levine identifies the skills that children need to succeed in a tumultuous future: adaptability, mental agility, curiosity, collaboration, tolerance for failure, resilience, and optimism. Most important, Levine offers day-to-day solutions parents can use to raise kids who are prepared, enthusiastic, and ready to face an unknown future with confidence and optimism.

Ready or Not Details

Ready or Not Review