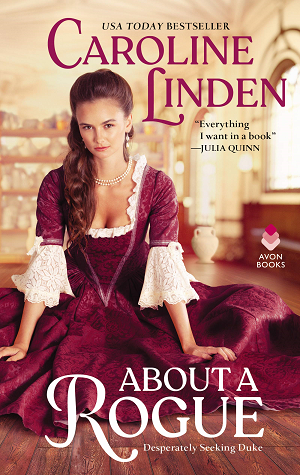 The first book in the new series Desperately Seeking Duke from USA Today bestselling and RITA award-winning author Caroline Linden.It’s no love match…Bianca Tate is horrified when her sister Cathy is obliged to accept an offer of marriage from Maximilian St. James, notorious rake. Defiantly she helps Cathy elope with her true love, and takes her sister’s place at the altar.It’s not even the match that was made…Perched on the lowest branch of his family tree, Max has relied on charm and cunning to survive. But an unexpected stroke of luck gives him an outside chance at a dukedom—and which Tate sister he weds hardly seems to matter. But could it be the perfect match? Married or not, Bianca is determined to protect her family’s prosperous ceramics business, even when Max shows an affinity for it—not to mention a dangerous ability to intrigue and tempt Bianca herself. And when Max realizes how beautiful and intelligent and desirable Bianca is, he’ll have to prove he’s no rogue, but the passionately devoted husband she craves…