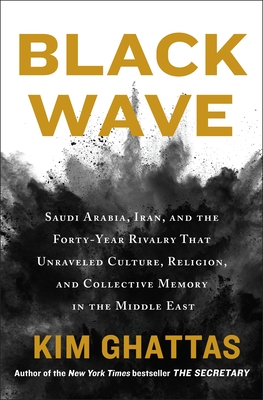 The bestselling author of The Secretary: A Journey with Hillary Clinton from Beirut to the Heart of American Power tells the gripping story of the real roots of the Middle East Sunni-Shia conflict in the 1979 Iran Revolution that changed the region forever.Black Wave is a paradigm-shifting recasting of the modern history of the Middle East, telling the largely unexplored story of the rivalry between Sunni Saudi Arabia and Shia Iran--a rivalry born out of the sparks of the 1979 Iranian revolution--that has dramatically transformed the culture, identity, and collective memory of millions of Muslims over four decades. Like George Packer did in The Unwinding, Kim Ghattas follows everyday citizens whose lives have been affected by the geopolitical drama, making her account both immediate and intimate.Most Americans assume that extremism, Sunni-Shia antagonism, and anti-Americanism have always existed in the Middle East, but prior to 1979, Saudi Arabia and Iran were working allies. It was only after that year--a remarkable turning point--that Shia Iran and Sunni Saudi Arabia began to use religion as a tool in their competition for dominance in the region, igniting the culture wars that led to the 1991 American invasion of Iraq, the September 11th terrorist attacks, and the rise of ISIS.Ghattas shows how Saudi Arabia and Iran went from allies against the threat of communism from Russia, with major roles in the US anti-Soviet strategy, to mortal enemies that use religious conservatism to incite division and unrest from Egypt to Pakistan. Black Wave will significantly influence both perception of and conversation about the modern history of the Middle East.