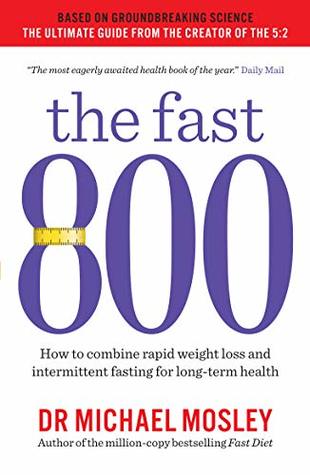 Six years ago, Dr Michael Mosley started a health revolution with the 5:2 Fast Diet, telling the world about the incredible power of intermittent fasting. In this book he brings together all the latest science - including  a new approach: Time Restricted Eating - to create an easy-to-follow programme.Recent studies have shown that 800 calories is the magic number when it comes to successful dieting - it’s an amount high enough to be manageable but low enough to speed weight loss and trigger a range of desirable metabolic changes.The secret of this new programme is that it is highly flexible - depending on your goals, you can choose how intensively you want to do it.Along with delicious, low-carb, Mediterranean-style recipes and menu plans by Dr Clare Bailey, The Fast 800 offers an effective way to help you lose weight, improve mood and reduce blood pressure, inflammation and blood sugars. Take your future health into your own hands.