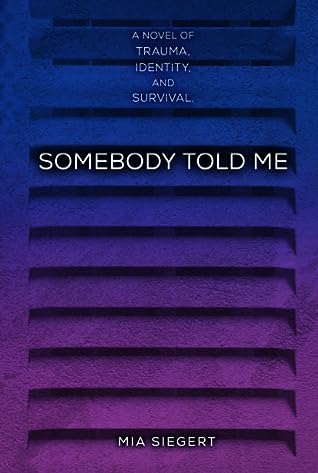 A novel of trauma, identity, and survival.After an assault, bigender seventeen-year-old Aleks/Alexis is looking for a fresh start―so they voluntarily move in with their uncle, a Catholic priest. In their new bedroom, Aleks/Alexis discovers they can overhear parishioners in the church confessional. Moved by the struggles of these "sinners," Aleks/Alexis decides to anonymously help them, finding solace in their secret identity: a guardian angel instead of a victim.But then Aleks/Alexis overhears a confession of another priest admitting to sexually abusing a parishioner. As they try to uncover the priest's identity before he hurts anyone again, Aleks/Alexis is also forced to confront their own abuser and come to terms with their past trauma.

Somebody Told Me Details

Somebody Told Me Review