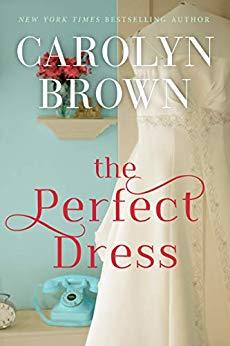 A plus-size Texas gal has designs on an old crush in New York Times bestselling author Carolyn Brown’s exuberant, bighearted romance. In the small town of Celeste, Texas, Mitzi Taylor has never quite fit inside the lines. Nearly six feet tall, flame-haired, and with a plus-size spirit to match every curve, she’s found her niche: a custom wedding-dress boutique catering to big brides-to-be with big dreams. Taking the plunge alongside her two best friends, she’s proud they’ve turned The Perfect Dress into a perfect success.Just when Mitzi has it all pulled together, Graham Harrison walks back into her life, looking for bridesmaid dresses for his twin daughters. A still-strapping jock whose every gorgeous, towering inch smells like aftershave, the star of all Mitzi’s high school dreams is causing quite a flush.For Mitzi, all it takes is a touch to feel sparks flitting around her like fireflies. She can just imagine what a kiss could do. Graham’s feeling it, too. And he’s about to make that imagination of Mitzi’s run wild. Is it just a hot summer fling, or are Mitzi’s next designs for herself and seeing her own dreams come true?