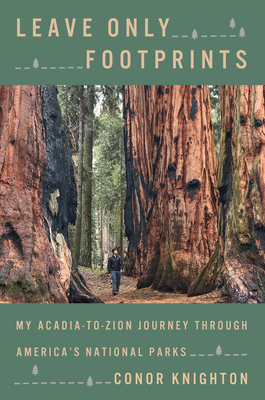 From the Emmy-winning CBS Sunday Morning correspondent, an entertaining chronicle of his year spent traveling to every one of our National Parks, including his experiences with some of the most beautiful places--and most interesting people--that America has to offer.When Conor Knighton decided to spend a year wandering through "America's Best Idea," he was worried the whole thing might end up being his worst idea. But, after a broken engagement and a broken heart, he desperately needed a change of scenery. The ambitious plan he cooked up went a bit overboard in that department; Knighton set out to visit every single one of America's National Parks, from Acadia to Zion. Leave Only Footprints is the memoir of his year spent traveling across the United States, a journey that yielded his "On the Trail" series, which quickly became one of CBS Sunday Morning's most beloved segments. In this smart, informative, and often hilarious book, he'll share how his journey through these natural wonders, unchanged by man, ended up changing his worldview on everything from God to politics to love and technology. Whether it's waking up early for a naked scrub in an Arkansas bathhouse or staying up late to stargaze along our loneliest highway, Knighton goes behind the scenery to provide an unfiltered look at America. In the tradition of books like A Walk in the Woods or Turn Right at Machu Picchu, this is an irresistible mix of personal narrative and travelogue-some well-placed pop culture references, too-and a must-read for any of the 331 million yearly National Parks visitors.