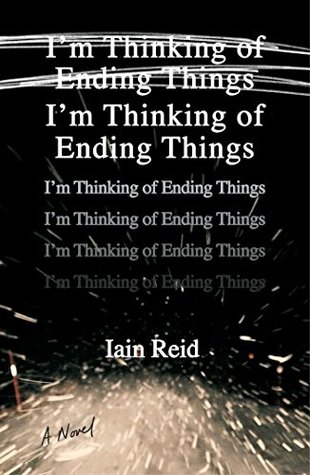 You will be scared. But you won’t know why…I’m thinking of ending things. Once this thought arrives, it stays. It sticks. It lingers. It’s always there. Always.Jake once said, “Sometimes a thought is closer to truth, to reality, than an action. You can say anything, you can do anything, but you can’t fake a thought.”And here’s what I’m thinking: I don’t want to be here.In this deeply suspenseful and irresistibly unnerving debut novel, a man and his girlfriend are on their way to a secluded farm. When the two take an unexpected detour, she is left stranded in a deserted high school, wondering if there is any escape at all. What follows is a twisted unraveling that will haunt you long after the last page is turned. In this smart, suspenseful, and intense literary thriller, debut novelist Iain Reid explores the depths of the human psyche, questioning consciousness, free will, the value of relationships, fear, and the limitations of solitude. Reminiscent of Jose Saramago’s early work, Michel Faber’s cult classic Under the Skin, and Lionel Shriver’s We Need to Talk about Kevin, I’m Thinking of Ending Things is an edgy, haunting debut. Tense, gripping, and atmospheric, this novel pulls you in from the very first page…and never lets you go.