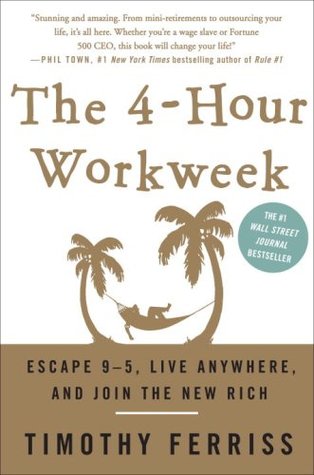 What do you do? Tim Ferriss has trouble answering the question. Depending on when you ask this controversial Princeton University guest lecturer, he might answer: "I race motorcycles in Europe." "I ski in the Andes." "I scuba dive in Panama." "I dance tango in Buenos Aires." He has spent more than five years learning the secrets of the New Rich, a fast-growing subculture who has abandoned the "deferred-life plan" and instead mastered the new currencies-time and mobility-to create luxury lifestyles in the here and now. Whether you are an overworked employee or an entrepreneur trapped in your own business, this book is the compass for a new and revolutionary world.Join Tim Ferriss as he teaches you:- How to outsource your life to overseas virtual assistants for $5 per hour and do whatever you want?- How blue-chip escape artists travel the world without quitting their jobs?- How to eliminate 50% of your work in 48 hours using the principles of a forgotten Italian economist?- How to trade a long-haul career for short work bursts and freuent "mini-retirements"?- What the crucial difference is between absolute and relative income?- How to train your boss to value performance over presence, or kill your job (or company) if it's beyond repair?- What automated cash-flow "muses" are and how to create one in 2 to 4 weeks?- How to cultivate selective ignorance-and create time-with a low-information diet?- What the management secrets of Remote Control CEOs are?- How to get free housing worldwide and airfare at 50-80% off?- How to fill the void and create a meaningful life after removing work and the office