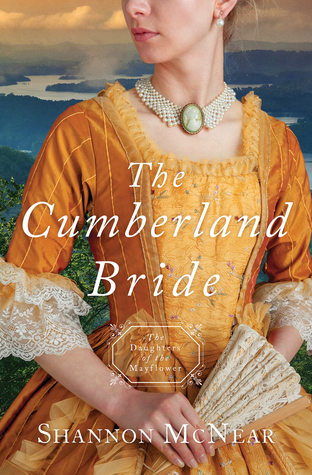 Thomas Bledsoe and Kate Gruener are traveling the Wilderness Road when conflicts between natives and settlers reach a peak that will require each of them to tap into a well of courage.Love and Adventure Are Discovered on the Wilderness Road​In 1794, when Kate Gruener’s father is ready to move the family farther west into the wilderness to farm untouched land, Kate is eager to live out her own story of adventure like he did during the War for Independence and to see untamed lands. And she sets her sights on learning more about their scout, Thomas Bledsoe. Thomas’s job is to get settlers safely across the Kentucky Wilderness Road to their destination while keeping an ear open for news of Shawnee unrest. But naïve Kate’s inquisitive nature could put them both in the middle of a rising tide of conflict. Is there more to Thomas’s story than he is willing to tell? Is there an untapped courage in Kate that can thwart a coming disaster?Join the adventure as the Daughters of the Mayflower series continues with The Cumberland Bride by Shannon McNear.More in the Daughters of the Mayflower series:The Mayflower Bride by Kimberley Woodhouse – set 1620 Atlantic Ocean (February 2018)The Pirate Bride by Kathleen Y’Barbo – set 1725 New Orleans (April 2018)The Captured Bride by Michelle Griep – set 1760 during the French and Indian War (June 2018)The Patriot Bride by Kimberley Woodhouse – set 1774 Philadelphia (August 2018)The Cumberland Bride by Shannon McNear – set 1794 on the Wilderness Road (October 2018)The Liberty Bride by MaryLu Tyndall – set 1814 Baltimore (December 2018)The Alamo Bride by Kathleen Y’Barbo – set 1836 Texas (February 2019)The Golden Bride by Kimberley Woodhouse – set 1849 San Francisco (April 2019)The Express Bride by Kimberley Woodhouse – set 1860 Utah (July 2019)The Rebel Bride by Shannon McNear – set 1863 Tennessee (December 2019)The Blizzard Bride by Susanne Dietze – set 1888 Nebraska (February 2020)The Chisholm Trail Bride by Kathleen Y'Barbo - (April 2020)

The Cumberland Bride (Daughters of the Mayflower, #5) Details

The Cumberland Bride (Daughters of the Mayflower, #5) Review