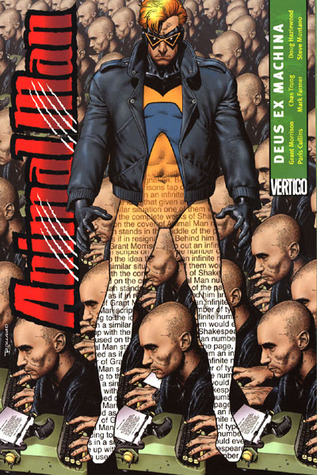 After a bizarre incident with an alien spacecraft, Buddy Baker, married father of two, suddenly gained the power to temporarily duplicate the abilities of any creature within his imediate vicinity Editorial Reviews Animal Man, with the power to take on the abilities of any animal temporarily, was a minor DC hero until he was revived and revamped in this well-remembered late-1980s series. This is the third and final volume (following Animal Man and Origin of the Species), collecting Morrison's run on the comic. The wild inventiveness he showed here is evidenced in his later work on Doom Patrol and The Invisibles, as well as more mainstream work on the Justice League and Marvel's New X-Men. Only longtime fans will fully understand and appreciate the critique of DC's confused continuity that Morrison includes here. But any reader is liable to be dazzled by Morrison's audacity; he not only asks and then answers the question "How would comic book characters react if they found out they were really only pictures on paper?" but also turns the book into a meditation on the convergence of stories and reality. Metafiction, meet metacomics. Along with Alan Moore's Swamp Thing, this was one of the series that inspired DC's creation of the mature readers imprint Vertigo. Recommended for all collections, for older teens and adults. Copyright 2004 Reed Business Information.