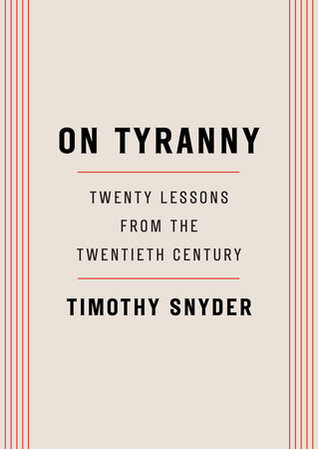 A historian of fascism offers a guide for surviving and resisting America’s turn towards authoritarianism.On November 9th, millions of Americans woke up to the impossible: the election of Donald Trump as president. Against all predictions, one of the most-disliked presidential candidates in history had swept the electoral college, elevating a man with open contempt for democratic norms and institutions to the height of power.Timothy Snyder is one of the most celebrated historians of the Holocaust. In his books Bloodlands and Black Earth, he has carefully dissected the events and values that enabled the rise of Hitler and Stalin and the execution of their catastrophic policies. With Twenty Lessons, Snyder draws from the darkest hours of the twentieth century to provide hope for the twenty-first. As he writes, “Americans are no wiser than the Europeans who saw democracy yield to fascism, Nazism and communism. Our one advantage is that we might learn from their experience.”Twenty Lessons is a call to arms and a guide to resistance, with invaluable ideas for how we can preserve our freedoms in the uncertain years to come.