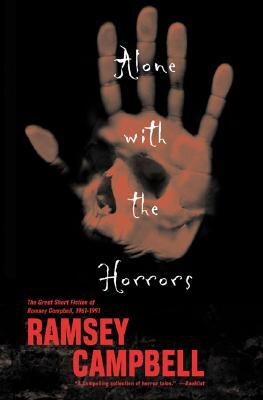 Ramsey Campbell is perhaps the world's most decorated author of horror fiction. He has won four World Fantasy Awards, ten British Fantasy Awards, three Bram Stoker Awards, and the Horror Writers' Association's Lifetime Achievement Award. Three decades into his career, Campbell paused to review his body of short fiction and selected the stories that were, to his mind, the very best of his works. Alone With the Horrors collects nearly forty tales from the first thirty years of Campbell's writing. Included here are "In the Bag," which won the British Fantasy Award, and two World Fantasy Award-winning stories, "The Chimney" and the classic "Mackintosh Willy." Campbell crowns the book with a length preface which traces his early publication history, discusses his youthful correspondence with August Derleth, illuminates the influence of H.P. Lovecraft on his early work, and gives an account of the creation of each story and the author's personal assessment of the works' flaws and virtues.In its first publication, a decade ago, Alone With the Horrors won both the Bram Stoker Award and the World Fantasy Award. For this new edition, Campbell has added one of his very first published stories, a Lovecraftian classic, "The Tower from Yuggoth." From this early, Cthulhian tale, to later works that showcase Campbell's growing mastery of mood and character, Alone With the Horrors provides readers with a close look at a powerful writer's development of his craft.

Alone With the Horrors Details

Alone With the Horrors Review