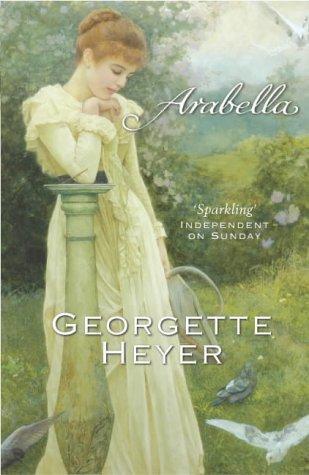 To Arabella Tallant, the eldest daughter of a penniless country clergyman, the invitation to stay with her London godmother was like the key to heaven, for in addition to living in the glamorous city, Arabella might even find a suitable husband there. Armed with beauty, virtue and a benevolent godmother, the impetuous but impoverished Arabella embarked on her first London season with her mother's wish in mind: snare a rich husband. On her way to London Arabella's carriage breaks down outside the hunting lodge of the wealthy and socially prominent Robert Beaumaris, fate cast her in his path. Arabella's only fault is impetuosity, and her pride stung when she overhears a remark of her path of arrogant host, who accused her of being another petty female after his wealth, the proud, headstrong ingenue made a most startling claim -- she was an heiress! A pretense that deeply amuses the jaded Beau. To counter her white lie, Beaumaris launches her into high society and thereby subjects her to all kinds of amorous fortune hunters in London and other embarrassments.Suddenly Arabella found herself the talk of the ton and pursued by some of the most eligible young men of the day. But only one caught Arabella's fancy: Beaumaris, the handsome and dedicated bachelor. She should know better than to allow herself to be provoked by nonpareil Beau. But would her deceitful charade destroy her one chance for true love...?Beaumaris, however, although a most artful matrimonial dodger, badly underestimated his seemingly naive adversary... When compassionate Arabella rescues such unfortunate creatures as a mistreated chimney sweep and a mixed-breed mongrel, she foists them upon Beaumaris, who finds he rather enjoys the role of rescuer and is soon given the opportunity to prove his worth in the person of Bertram Tallant, the also impetuous young brother of Arabella....