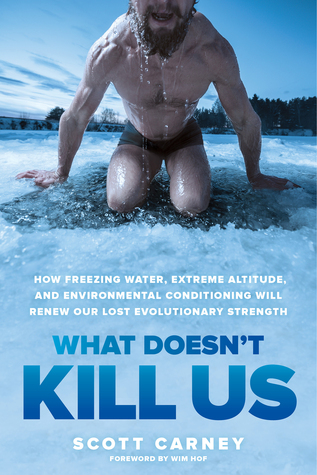 What Doesn't Kill Us traces our evolutionary journey back to a time when survival depended on how well we adapted to the environment around us. Our ancestors crossed the Alps in animal skins and colonized the New World in loin cloths. They evaded predators and built civilizations with just their raw brainpower and inner grit. But things have changed and now comfort is king. Today we live in the thrall of constant climate control and exercise only when our office schedules permit. The technologies that we use to make us comfortable are so all-encompassing that they sever the biological link to a changing environment. Now we hate the cold and the heat. We suffer from autoimmune diseases. And many of us are chronically overweight. Most of us don't even realize that natural variation--sweating and shivering--is actually good for us. What Doesn't Kill Us uncovers how just about anyone can reclaim a measure of our species' evolutionary strength by tapping into the things that feel uncomfortable. When we slightly reimagine how our body fits into the world, we can condition ourselves to find resilience in unfamiliar environments.The feeling that something is missing from our daily routines is growing and has spawned a movement. Every year, millions of people forgo traditional gyms and push the limits of human endurance by doing boot camp style workouts in raw conditions. These extreme athletes train in CrossFit boxes, compete in Tough Mudders and challenge themselves in Spartan races. They are connecting with their environment and, whether they realize it or not, are changing their bodies. No one exemplifies this better than Dutch fitness guru Wim Hof, whose remarkable ability to control his body temperature in extreme cold has sparked a whirlwind of scientific study. Because of him, scientists in the United States and Europe are just beginning to understand how cold adaptation might help combat autoimmune diseases and chronic pains and, in some cases, even reverse diabetes. Award winning investigative journalist, Scott Carney dives into the fundamental philosophy at the root of this movement in three interlocking narratives. His own journey culminates in a record bending 28-hour climb up to the snowy peak of Mt. Kilimanjaro wearing nothing but a pair of running shorts and sneakers.

What Doesn't Kill Us Details

What Doesn't Kill Us Review