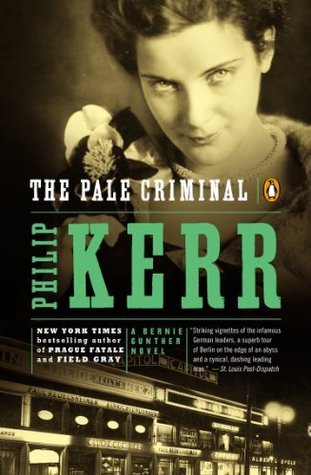 In the sweltering summer heat wave of 1938, the German people anxiously await the outcome of the Munich conference, wondering whether Hitler will plunge Europe into another war. Meanwhile, private investigator Bernie Gunther has taken on two cases involving blackmail. The first victim is a rich widow. The second is Bernie himself.Having been caught framing an innocent Jew for a series of vicious murders, the Kripo—the Berlin criminal police—are intent on locating the real killer and aren't above blackmailing their former colleague to get the job done. Temporarily promoted to the rank of Kommissar, Bernie sets out to solve the dual mysteries and begins an investigation that will expose him to the darkest depths of humanity...Hailed by Salman Rushdie as a "brilliantly innovative thriller-writer," Philip Kerr is the creator of taut, gripping, noir-tinged mysteries that are nothing short of spellbinding. In this second book of the Berlin Noir trilogy, The Pale Criminal brings back Bernie Gunther, an ex-policeman who thought he’d seen everything on the streets of 1930s Berlin—until he turned freelance and each case he tackled sucked him further into the grisly excesses of Nazi subculture. Hard-hitting, fast-paced, and richly detailed, The Pale Criminal is noir writing at its blackest and best.