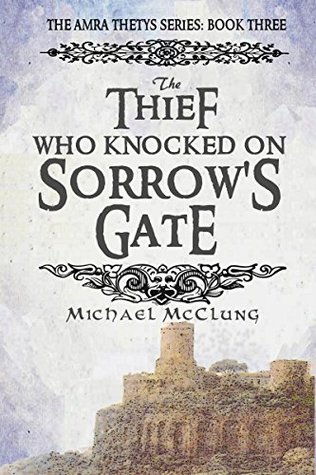 After surviving Thagoth and returning rich to Lucernis, Amra and Holgren have settled down to a very comfortable, if decidedly unexciting life -- until the night Amra receives an old enemy's head in a box. A longstanding debt calls her back home to Bellarius, the scene of many childhood horrors she would much rather forget about.But as bad as memories of the past might be, present-day Bellarius is rapidly becoming worse, for the Eightfold Goddess has not forgotten about Amra, and another of Her Blades, the Knife that Parts the Night, has been discovered and threatens to tear the very fabric of reality apart.All that stands in the way of utter destruction is one small, scarred thief and her mage companion...

The Thief Who Knocked on Sorrow's Gate (Amra Thetys, #3) Details

The Thief Who Knocked on Sorrow's Gate (Amra Thetys, #3) Review