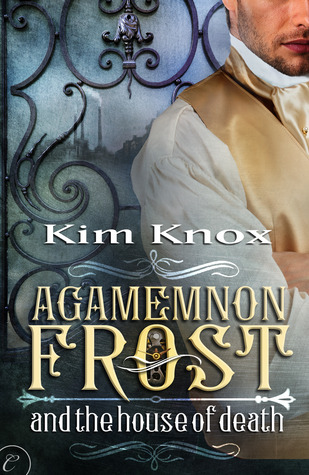 Book one of Agamemnon FrostLiverpool, 1891Decorated artilleryman Edgar Mason was forced to find new work when the British Empire replaced its foot soldiers with monstrous machines. Now he waits on the Liverpool elite as a personal servant. He has just one rule: he won’t work for fashion-addled dandies.Agamemnon Frost, however, is far from the foppish man-about-town he appears to be. He’s working to protect the Earth from an alien invasion being planned by a face-changing creature known as Pandarus. And on the night he plans to confront the aliens, he enlists Mason to assist him.For a man to love a man is a serious crime in Victorian England. But when Mason meets Frost, his heart thunders and his blood catches fire. And when Pandarus drags the two men into the torture cellars beneath his house of death to brainwash them, Mason’s new passion may be all that stands between him and insanity.The trilogy continues with Agamemnon Frost and the Hollow Ships.