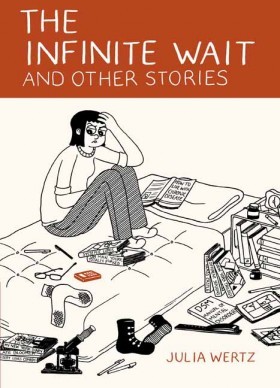 The Infinite Wait and Other Stories is the latest book from Julia Wertz, the critically acclaimed author of The Fart Party Vols. 1 and 2 (Atomic Books, 2007 and 2009) and Drinking at the Movies (Random House, 2010). In contrast to her last book, which was a full-length graphic memoir, The Infinite Wait is not a sustained narrative, but rather a collection of three short stories or graphic novellas. The stories in this collection contain Wertz’s signature acerbic wit, ribald humour and keen eye for the everyday, but they also find the cartoonist delving into the personal. “Industry” catalogues 25 years of alternately terrible and terrific jobs, from selling golf balls, feeding and failing to feed animals, waitressing, and finally to cartooning and the publication of her first book. “A Strange and Curious Place” is a love letter to Wertz’s hometown library; its mysteries and revelations, and its ability foster growth, rebellion and even artistic affirmation. The most sustained narrative in the collection, the eponymous “The Infinite Wait,” chronicles Wertz’s move from her small hometown to San Francisco, her diagnosis with an incurable, auto-immune disease and her subsequent discovery of comics and comic making.The collection’s title, The Infinite Wait and Other Stories, intentionally and ironically recalls the vacuous and pretentious book titles of the literary elite, but these stories are the polar opposite of pretension. They are comics born out of illness, but not defined by it, and they are filled with the sometimes messy, heartbreaking and hilarious moments that make up a life.

The Infinite Wait and Other Stories Details

The Infinite Wait and Other Stories Review