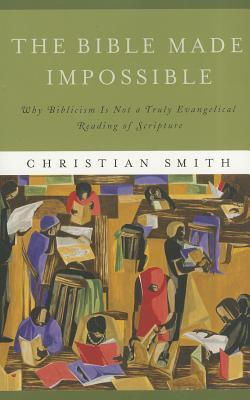 Biblicism, an approach to the Bible common among some American evangelicals, emphasizes together the Bible's exclusive authority, infallibility, clarity, self-sufficiency, internal consistency, self-evident meaning, and universal applicability. Acclaimed sociologist Christian Smith argues that this approach is misguided and unable to live up to its own claims. If evangelical biblicism worked as its proponents say it should, there would not be the vast variety of interpretive differences that biblicists themselves reach when they actually read and interpret the Bible. Smith describes the assumptions, beliefs, and practices of evangelical biblicism and sets it in historical, sociological, and philosophical context. He explains why it is an impossible approach to the Bible as an authority and provides constructive alternative approaches to help evangelicals be more honest and faithful in reading the Bible. Far from challenging the inspiration and authority of Scripture, Smith critiques a particular rendering of it, encouraging evangelicals to seek a more responsible, coherent, and defensible approach to biblical authority.

The Bible Made Impossible Details

The Bible Made Impossible Review