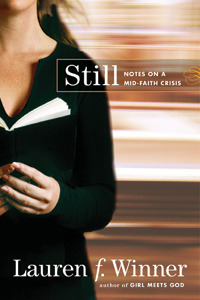 Following up her highly acclaimed Girl Meets God, author Lauren F. Winner has written an engrossing reflection of literary grace and spiritual wisdom with Still: Notes on a Mid-Faith Crisis.As she lives through a failed marriage and the loss of her mother, Winner finds her Christian faith slipping away. Through reading religious works and tomes and being counseled by leaders of the church, she learns she must find the courage to trust in God in order to to find His presence.Elegantly written and profound, Still offers reflections on how murky and gray the spiritual life can be while, at the same time, shows us how to see the light we do encounter more clearly.